How The Nightclub Culture Has Changed Over The Past 30 Years

Elon Musk’s Boring Co. Is Run by a Former Bar Owner Who Can Quote Ayn Rand

Black Friday is still expected to be the busiest shopping day of the year. But restaurants don’t necessarily get a spending boost as consumers head out to snag deals.

The NPD Group analyzed receipts from a panel of 150,000 customers nationwide and found that last year the big traditional shopping days were not the highest restaurant volume days. In fact, Black Friday 2018 was only the 14th best restaurant day in the holiday period. The top restaurant day was Saturday, Nov. 17, the weekend before Thanksgiving.

“Everyone has this assumption that because Black Friday is a traditional big brick-and-mortar shopping day that it creates a big boom for restaurant traffic,” said David Portalatin, vice president and food industry advisor for the NPD Group. “I am certain that restaurants that are co-located in shopping malls or are very close to big retail destinations probably have a pretty good day on Black Friday. But it’s just not a big day for the restaurant industry as a whole.”

The dates analyzed by the market research company were Nov. 4, 2018, through Jan. 5, 2019, and include all restaurant categories. 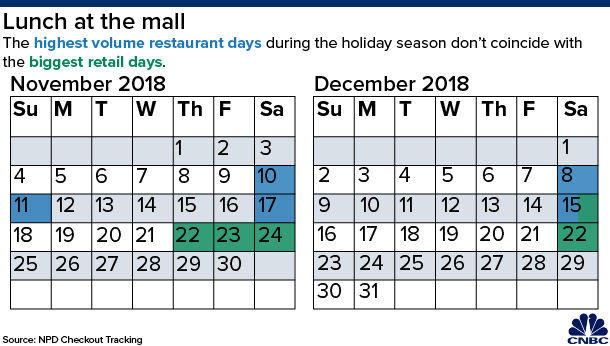 NPD did find that December showed an increase in people eating out after they shopped or ran errands, but it’s likely they would have eaten out anyway during a normal weekend. Big shopping days like Thanksgiving and Black Friday are days when restaurants tend to not perform as well, relative to a typical Thursday or Friday, the group said.

The two worst days of the season for restaurant volume were Christmas Day and Thanksgiving Day.

“The vast majority of us are going to eat Thanksgiving dinner either in our home or in someone else’s home. And guess what happens the day after Thanksgiving? It’s leftovers time,” he said.

But it’s not all bad news for restaurants during the holiday season.

Most of the major restaurant stocks have had an uneventful holiday season from early November through January over the past five years as well. The best performer has been Wendy’s, which has a market cap of $5 billion, up over 4%.

But while the stocks may not show it, Portalatin says those that serve beverages like coffee will likely see a boost.

“You are going to find that Starbucks is absolutely jam-packed because people are going to have a lot of beverage-only occasions between meals,” he said. “So you’ll likely find a very long line queued up there for coffee.”

What Happens When a Fitness Chain Opens a Restaurant?

Miracle on Monroe at Tapa Tapa in Atlanta